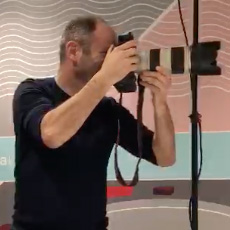 Established as a photographer since 1995, Charles Sturge has been commissioned by the New York Times, The Telegraph (a regular contributor), The Times, Le Figaro, Reporters, El Pias SEMINAL and many other national and international publications. Sponsored by Motorola, he became the Black Eyed Peas official European Tour photographer and has been in the top 6 of the Sunday Times Ian Parry Scholarship, an award for photojournalism.

Clients include a portion of the world most famous brands. Charles operates calmly and is confident both working with media agencies and collaborating with clients directly. Recently Charles was named winner of Corporate Photographer of the year which led to him picking up a new global client.

Major assignments include documentary film stills for EPL Pictures on Abbey Road Recording Studios which took him to Hollywood and resulted in many main stream publications. He spent five months following Raleigh International and covering Tourism in Namibia resulting in a feature in The Times and a private viewing at the Namibian High Commission (with the most delicious beef ever experienced flown in from Namibia by the ambassador!).

A three month assignment took him from Bolivia to Buenos Aires on a reed boat with the legendary explorer Colonel John Blashford Snell. Charles both photographed and filmed the semi military voyage which again resulted in several publications including The Telegraph and Geographical Magazine. Although no longer filming his documentary on this expedition was broadcast by National Geographic as part of a larger adventure series.

Later GSM Association approached him to travel through the world’s emerging economies to document the mobile phone revolution with a mandate to find people whose lives had been changed by the introduction of the technology, to produce advertorials and to create an image library. This led on to Charles being approached by Seattle based production company OnRequest Images to produce sample images illustrating Adobe Lightroom, a program designed for the worlds professional photographers.

On tour with the Black Eyed Peas, while sitting next to will.i.am at an after party, Charles was asked by a fan to have his picture taken with her in preference to Will "It’s been fun"

Spot me in the official Black Eyed Peas tour video